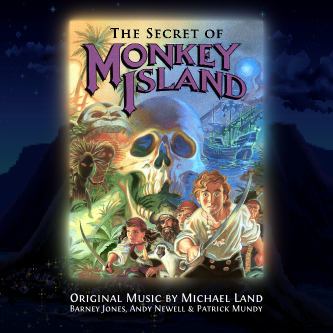 The Secret of Monkey Island
music by Michael Land and others*

40 minutes of pure nostalgia! Being unsatisfied with the audio quality and sequencing of existing releases, I took the enhanced CD version of the game and tried to make a listenable experience out of it. I also added the PC speaker version of the main titles to the album. The track list (below) and its song titles are different to other releases but I included alternative names of the pieces in the liner notes/comments of the FLAC files (and as tooltips on this page) to keep the confusion low. This “19th Anniversary Edition” tries to serve the audiophile as well as the completist.

Another very interesting release of “The Secret of Monkey Island” — a Roland MT-32 version — can be found on the Soundtrack Island. For the full PC speaker version go here.

*) other composers involved in the making of the soundtrack: Barney Jones, Andy Newell & Patrick Mundy.